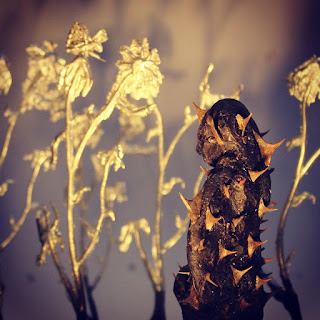 A film by Peter Bach of the closing performance with Blanc Sceol
on March 10th at the Hare and Billet Pond is now on YouTube here.
Catalogue of 2018-19 work here


In 'Otherworld', a series started in 2015, award winning artist Victoria Rance imagined Blackheath as it once was, and could be once again if it were re-inhabited by its lost creatures and local spirits. She looks at the connections between humans, animals and nature and creates tiny detailed pewter characters from her imagination and mythology, setting them in tableaux scenes.


Responding to the location and the time of the mad March hare, Rance also showed a new series of talismanic sculptures based on The Three Hares, an ancient archetypal symbol. She sees the motif as a way of honouring our precious declining wildlife, as well as being a helpful counter to the conflicted and binary splitting of current world views.

She writes:
"In 1859 the Greenwich Natural History Society made a record of fauna on Blackheath. The animal species recorded included Natterjack toads, hares, lizards, bats, quail, ring ouzel and nightingales. Today the bats are the only regular inhabitants on that list. Otherworld, my exhibition opening on March 1st is on Hare and Billet Road. Opposite is the Hare and Billet Pond which has the most natural wildlife of the three ponds on Blackheath. There are many residents and local experts who work hard to protect the wildlife that we have left on Blackheath which is in the boroughs of Lewisham and Greenwich. It is acid grassland, a site of Metropolitan Importance for Nature Conservation, with an impressive number of bees, wasps and ants species recorded, the most recent study is by David Notton of The Natural History Museum.  It is also used regularly by humans for fairs and festivals such as On Blackheath and the fireworks on or around Guy Fawkes day, sports, kite flying, dog walking and picnics. At over 200 acres it is one of the largest areas of common land in Greater London. The Blackheath Joint Working Party, Greenwich Wildlife Action Group and The Blackheath Society are among local amenity groups which help protect it and educate about it.


My point of view as an artist is to honour it by evoking a different type of world, one which is lost not just to the Heath but to most of Western Society. This is a world in which our connection to nature is imagined through nature spirits. Last year before a visit to The Outer Hebrides I read Magical Folk: British and Irish Fairies 500 AD to the Present by Simon Young and Ceri Houlbrook. It is a scholarly history of fairy sightings, which amazingly enough do continue in the UK. There is still a remnant of belief in these hobgoblins, elves, dryads and fairies of our old stories which screamed when trees were cut down, punished when sacred places were violated or caused mayhem when certain animals were killed without due care and respect. If we still all had respect for these old superstitions (as they do in Iceland) perhaps the destruction of natural habitats would be far less prevalent, climate change not such a threat, and we’d even still have brown hares running around on Blackheath. For Otherworld I have discovered (in my research, dreams and imagination) some creatures whose job it is to haunt and protect the Heath through fear or favour."


“Rance’s Work as a whole both reveals and acknowledges the disturbing things that are going on around us before offering us an alternative or means of protection; uniting the knowing and the notknowing, the visible and the invisible, the supernatural and the rational, the loving and the terrible.”
Anna McNay, Assistant Editor, Art Quarterly