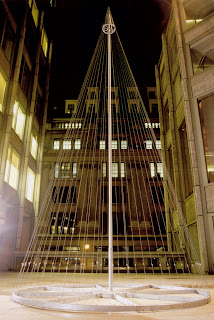 Entering the sculpture's interior through a gap in the steel rods affords a rare moment of refuge, a reference to the church's role as sanctuary. Any sense of security is short lived however, as the converging struts draw our eyes upwards to accentuate the feeling of being penned in on
all sides by the towering office buildings."

"It may seem irreligious to suggest that the line between life and death is commonly crossed over, anyway. Victoria Rance's cage with open doors is delicately wrought out of material to create an essential place within a place. It is straightforwardly necessary for sculptors to create to control a place for atmosphere. The combination of church, which already predetermines certain expectations, and Rance's transparent mausoleum is strong. The whole place is brooding anyway and yet this suggests a stillness after the event, that something has already happened.

Rance desires to bring a certain level of tenderness
back into the situation; the priest might preach this
anyway, from the pulpit, but here given references
merge with artistic production." 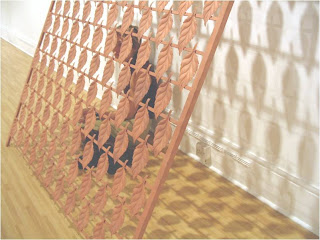 Attic 2004-05 is based in her recollections of
the 'Under 12's Camp Attic,' where Rance and childhood friends gathered, a secret place where older siblings were not permitted.
The sculpture is the evocation of a roof space, made from leaves purchased from the catalogue of decorative steel foliage and flowers. Rance has created a safe place, that is as much camouflage
tent or cover as it is an attic. Once assembled, the sculpture was sandblasted and sprayed successively
with hot zinc and hot copper. The resulting near terracotta colour further endows the work with the association of the roof hideaway. "

Victoria Rance The Mark Tanner
Sculpture Award
Standpoint Gallery, Hoxton
by KM
www.londonlostandfound.com
"A series of sculptures look like they have
something to do with places to shelter, or
protection, in the way that shells do. But
they also have an air of the residual about
them, as if what was once there has vacated
the safety of this shelter. 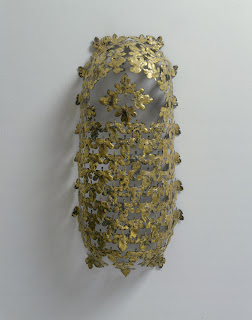 There are no literal narratives, rather,
they have an overall sense of humanity.
The absence of clear practical function
which these objects display further adds
a spirituality, or religious aspect to them
insofar as what we cannot see in terms of
practical function, we invent as metaphor
and icon."

Charles Pickstone was the 2006 winner of the Bernard Denvir
AICA Memorial Award for Art Critics with this article, link:
Image Journal USA 2005 (ISSN 1087-3503)
"Rance's particular talent to evoke into
almost visible form; a sort of alembic of
infinity. A work like this acts like a valley
of dry bones and almost compels the
viewer to clothe it with flesh. Whether this
"flesh" is actually narrative shape,
psychological analysis, historical association,
structural interpretation or material resonance
- all of which are perfectly possible - Rance
provides us with the phonemes of a visual
language, the minimal visual signifiers that
the viewer needs, once drawn into these works,
to participate in a language that speaks of the
richness, complexity and depth of life itself." 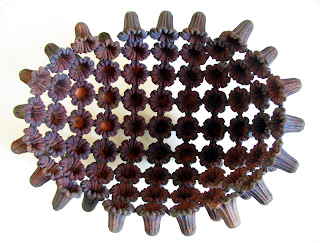