I was really pleased to have been invited by Cable Depot curator Iavor Lubimirov to be in residence from mid February to mid May 2021. His generous vision for what is possible during lockdown has embraced my work. The resulting installation is a dark dreamy space with four films as installations playing together, their sounds overlapping. On live CCTV constantly it could be viewed by anyone at any time online, this page records that experience. The space was ideal for visits in ones and twos when lockdown rules allowed. 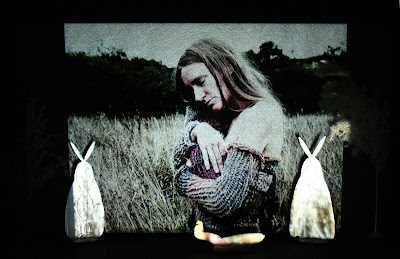 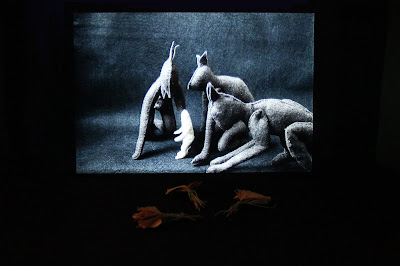 ‘The Fates’, was made during Covid19 times in 2020. I made the three weird dolls and baby I used for it before I got the virus. I then began animating with small dolls I made in my bed when I was ill, using a shoebox both to store the felt, cotton and needles, and to create the sets. When I recovered I went back to the studio and photographed the dolls to make this short animation of the creatures finding a small human and deciding its fate. 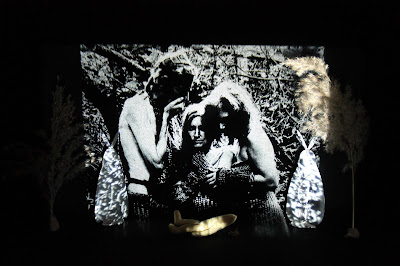 A baby is also the centre of ‘Myth’. This was made in the hot summer of 2017 when I sat on the wall over Deptford Creek and knitted costumes based on the colours of the water, flowers and tides beneath my feet. One costume was made on the Thames near where I grew up. Three friends – Esther Bunting, Steve Ritter and Ursula Troche, whom I met as life models for my drawing classes, wore them in a field in Kent. And the story of baby being found and lost by these people was based on solar myths around the cycle of rising and setting, the sun being born and dying daily. 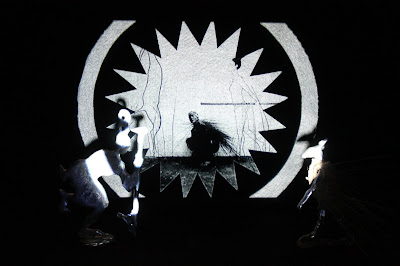 ‘Pan and the goddess’ (2019) was made after a visit to Pan’s Garden, the house of my great grandmother Eva, a woman who built an altar to Pan in her house. During the visit with my cousin we discovered that she had been an early environmentalist, and was concerned about the rampant urbanisation that was starting at the beginning of the 20th century. Pan had become an important figure at the time for others like EM Forster and Kenneth Graeme. I spent that summer in France sitting with and drawing goats. Charlotte Law wore the costume I had made a few years ago and she interacted with a mural I had made of the goddess (a dream figure) and Pan. 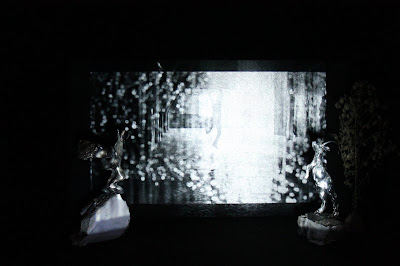 ‘River Mercury’ was made in 2012 using old footage of when my son, Cole Pemberton, was young. His love of playing in the bath, his imagination, his dream world and online world and his fantasies connected with my interest in Mercury the shape shifting messenger between humans and the gods. “In real life” was a phrase we used when talking about where his stories with his friends and characters actually happened. Over lockdown last year we became much more involved in each other’s worlds again. For the installation at Cable Depot he has written new music for this film and ‘The Fates’. He also wrote the music for ‘Pan and the goddess’ in 2019.