I have just returned from Siena, Italy, which I visited with four other artists two of whom, Frank Creber and Andrea McLean, are in a forthcoming exhibition with me: Good and Bad Government at Thames-side Studios Gallery (see below). In particular we went to see The Sala della Pace in the Palazzo Publico, the site of the Good and Bad Government frescos by Ambrogio Lorenzetti. Commissioned by The Council of Nine (the Nove) for the council chamber, it was painted from 1337-40. 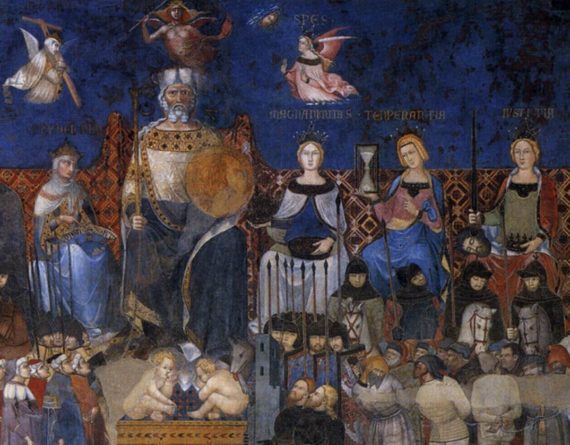 Formed in 1285 this council was the system of government of the Commune. It was an oligarchy in which nine men from the merchant and banking classes took turns making decisions on the council. It aimed to stop the incessant fighting between factions and families which had made the city unsafe, and it lasted with remarkable stability for over sixty years. The fresco celebrates the Well Governed City presided over by “ben commune” the common good, an old man who is an embodiment of the people. Nine rather than seven allegorical figures or Virtues surround him, including Peace who reclines in the relaxed posture of a Roman matron, her unneeded armour beneath her cushions, as she watches over the good city’s comings and goings, and the productive work in the countryside. All is harmonious, it is summer and spring there. 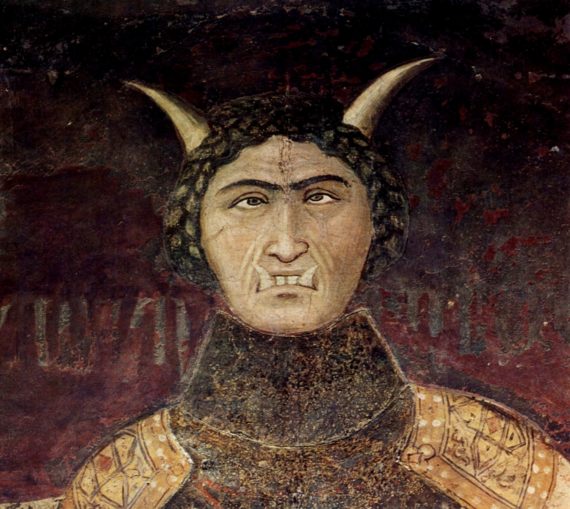 In contrast the badly governed city is ruled by a horned tyrant with bestiality in the form of a goat at his feet. Around him are Vices such as Diviso, division (or doubt we postulated) with Si and Non on each side of her who painfully saws herself in half, alongside cruelty, deceit, fraud and fury. This panel is sinister, read from left to right, and ends up in a decimated, polluted stagnant countryside with a green unhealthy river. Fighting, murder, waste, destruction are depicted, it is autumn and winter. 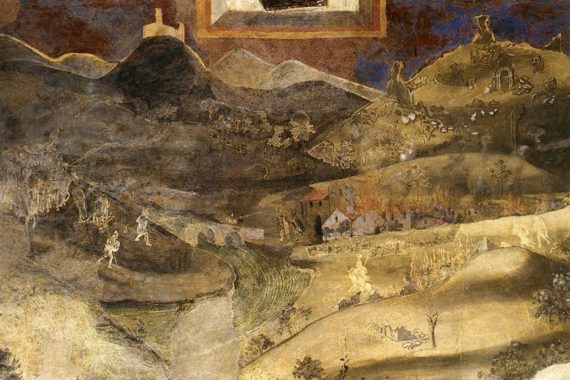 The allegorical thinking behind this was possibly influenced by Petrarch the  widely read poet, (made poet laureate in 1341). He was introducing humanist ideas and classical thinking into a culture which had formerly been dominated by deeply religious and Christian ideas of virtue. Instead of haloed saints or angels here we see Justice and Concord watching over the scene. The immediately recognisable duomo is relegated to a tiny corner of the city’s panorama. Petrarch was friends with Simone Martini and humanist ideas were just beginning to be discussed, as the inhabitants realised that it was up to them to shape their form of rule. Former hierarchies were no longer working, and a fairly negotiated sharing of power was the way forward if the city was to thrive. And it did thrive. It became wealthy, with trade and the arts and architecture flourishing. The population grew too. This form of government lasted with success until 1348 when the bubonic plague hit Europe and perhaps half the population of Siena died. The council became unpopular because of taxation and was overthrown in 1355.

I went to Siena in the middle (or beginning?) of a resurgence of feminism, with the “me too” campaign bringing daily illustrations of abusive male hierarchical behaviour towards women, so gender was uppermost on my mind. The nine was, of course, composed only of men. The council chamber would have been visited mostly by men, I imagined. Perhaps the serving women would have seen the frescoes, but the images were not made for them. It wasn’t their behaviour which was being addressed. In fact the virtues, beneath which the ruling male Sienese population process, are all female. The vices personified include males as Prodito (Treason) and Fraus (Fraud) along with depictions of traits such fury, discord, war, vain glory. 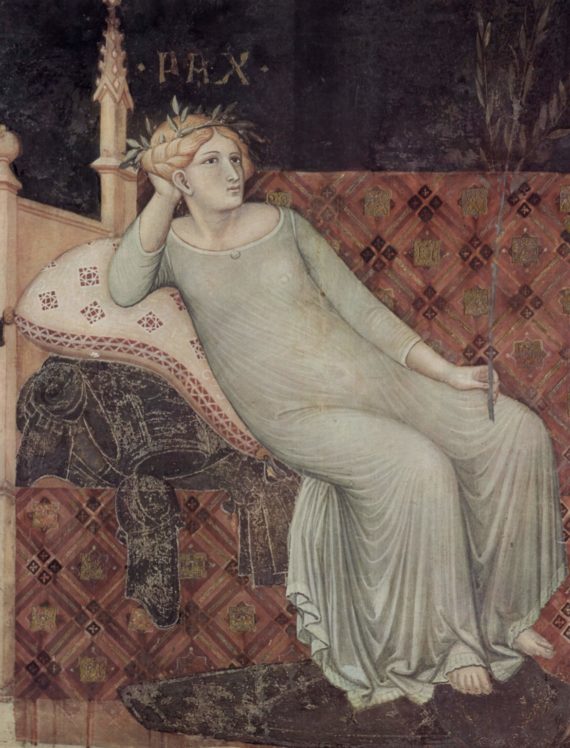 I wanted to look at the other Sienese art of the period to see what made this allegorical mural so different from the religious images, so radical.  The city had been dedicated to The Virgin Mary many times, most particularly after a famous battle which the Sienese won against the Florentines in 1260. The dedication ceremony involved circling the city and other symbolic rites. And the Nine encouraged and paid for big celebrations on The Feast of the Virgin in August. Walking around the city you see images of her everywhere. And even today freshly cut flowers at shrines. The city was rededicated to the Virgin most recently during World War Two. I tried to imagine being an alien arriving here, and assessing who ruled the city. The answer had to be a mother goddess. Mary is depicted holding a baby or with her arms extended and her cloak open protecting those beneath it as the wall protects the citizens. Human women may have been missing from the council chamber but her image ruled everywhere else. Not only is she depicted as a mother, but images of her birth are commonly found. In all churches and museums I saw the women-only scene where her mother Anne lies just after childbirth, and friends or midwives are about to wash the radiant baby, with a hand testing the temperature of the water, just as I was taught to do when my baby sister was born. 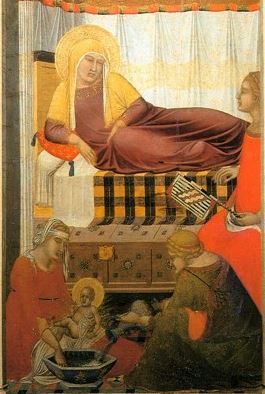 The depiction of the life of the virgin from birth to death to her assumption into heaven puts her at the centre of events. Only when she is being crowned by Christ as Queen of Heaven is she depicted bowing her head to a male figure, and as my husband pointed out, this is her coronation, now she is Queen and rules. The kindness and tenderness she represented was enacted throughout the city by men and women in the hospices, the refuge given to orphans, the sick, those who had become poor. The frescos in Santa Maria della Scala of the workings of the hospital by Domenico Bartolo painted in 1440-1441 illustrate how this care for the commune as a whole survived into the 15th century. 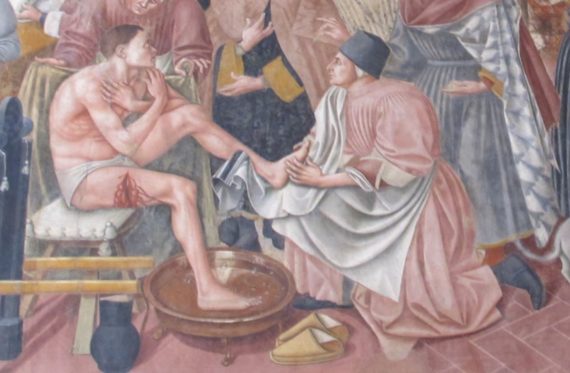 Before going to Siena I was thinking about the relationship between ‘mother goddess’ figures and the Virgin Mary. I looked at Horus being nursed by Isis, Venus and Cupid, and other precursors going back to Palaeolithic times such as The Venus of Lespugue. While in the archeological museum in Siena I saw a Roman tutelary figure of a mother and baby. When I visited La Paz, Bolivia forty years ago I was struck with the continued presence of the Pacha Mama alongside The Virgin Mary. There seemed to be no conflict between them. Every time you were given an alcoholic drink you poured a little on the ground for the Pacha Mama. She assists life in many ways. When you go into churches you see the Virgin Mary. The Mexican Virgin of Guadelupe, which was a miraculous depiction of Mary as an indigenous woman, is the most visited place of pilgrimage for Catholics and third most visited religious site in the world. I saw yesterday that Marina Warner had to write a new introduction to her book about the Virgin Mary “Alone of all her sex” because she had predicted in 1976 when she wrote it that she would fade away as an iconographic figure. In fact the reverse has happened. I read it in 1985 and plan to read it again now.

There is currently an exhibition of Ambrogio Lorenzetti’s work at the Santa Maria della Scala. This is a beautifully presented exhibition of stunning works. What is most touching for me is the relationship depicted between mother and child. The Madonna Latte, the breast feeding Madonna depicts such a sweet tenderness. The baby looks out as we interrupt them, keeping the nipple in his mouth, a familiar response when you breast feed with others around. A sculpture in the Pinacoteca depicts a baby grasping his mother’s dress and she laughs at him with such merriment. These Madonnas are so present and human, so adorable. It is that very adorability that caused their downfall later as Mariolatry became condemned during the Reformation in Protestant times. Images such as these were destroyed in Northern Europe. It is horrible to think what we lost in English churches and monasteries. Instead Christ crucified took her place. Imagining myself as an outsider again, attempting to see things as they are with fresh eyes, I find it very disturbing that this image of brutality and torture became the predominant image seen in every religious building in Northern Europe which replaced that of loving mother. 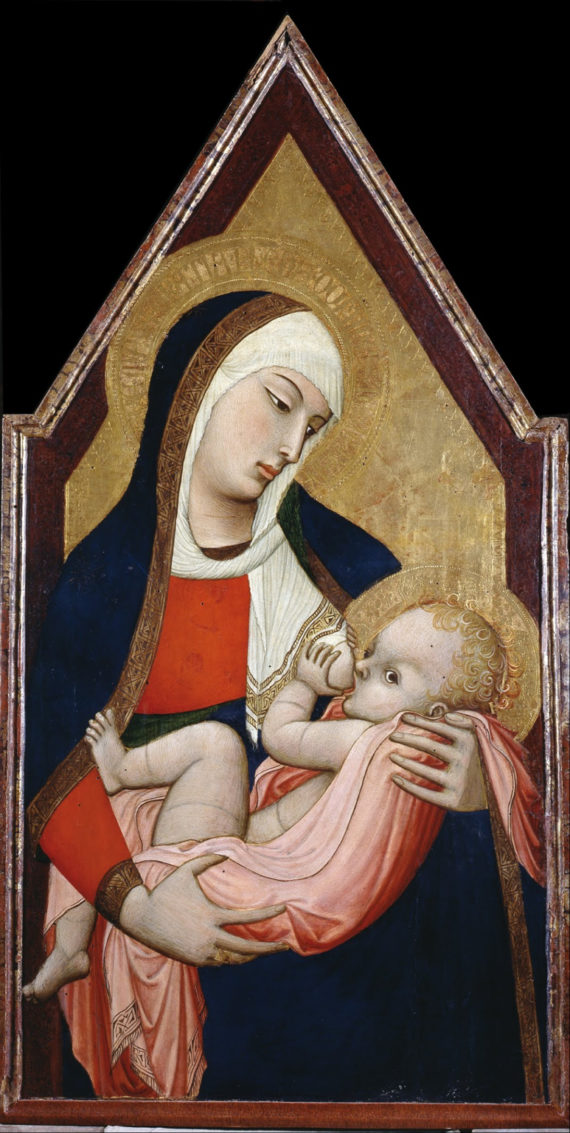 Back to 2018 and I am trying to find what relevance the Lorenzetti fresco means for us now. He was presenting us with an ideal to aim for. A way to think of ourselves as humans overcoming our beastly natures. Thinking about discord and misrule I realise that you can’t suppress the female without a backlash. If you have Trump as president with his inability to respect women, using, then paying off a porn star when his wife has just given birth, and scorning women, pacing the stage like a tyrant, then something has to give. I happened to be in America when he referred to the menstruation of a women interviewer, trying to belittle her by describing her “tears of blood”, betraying his deep misogyny. There has to be a balance, and Peace and Concord will only rule over us all when we have a balance of power between the sexes. Lorenzetti’s frescoes were about balance. Justice is tied up and helpless in the scene of bad government. In the scene of good government Justice carefully measures out with her scales. Beneath her Concord holds a plane to make sure all is even. Above the well governed city hovers Security with a scroll which reads “Every man can travel freely without fear, and each can till and sow, so long as the commune keeps this lady [Justice] as sovereign for she has stripped the wicked of all power.” Behind her a wicked man has been hung. Watching on from the adjacent fresco is Peace. 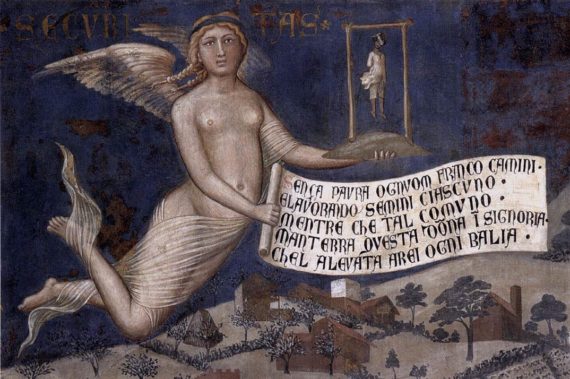 Bibliography
A Mediaeval Italian Commune: Siena Under the Nine 1285 to 1355 by William M Browsky
Sienese Painting by Timothy Hyman published by Thames and Hudson
Siena History and Masterpieces by Piero Torrititi
Alone of All Her Sex: The Myth and the Cult of the Virgin Mary by Marina Warner
Our Lady of Guadelupe