Fasnacht and The Sleep of Reason 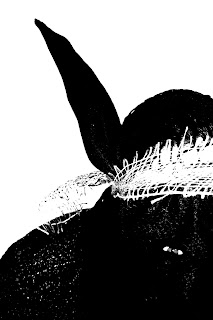 Fasnacht 2016 is a re-edit of an earlier animation made in 2013. It will be shown in the studio as part of APT Live, APT Studios, Deptford, London in September 2016.

The short film Fasnacht was originally shown in The Sleep of Reason at BBK  Bierstraße 33 in Osnabrück, September 6th to October 19th 2013. The exhibition was the culmination of a year of exchange of ideas between Victoria Rance and Sylvia Lüdtke using Goya's etching "The Sleep of Reason Produces Monsters" as a starting point. link to catalogue on dropbox pdf

For this exhibition Victoria Rance analysed what lies under the persona, and the parts of the personality that get pushed into an unconscious inner world or projected onto others. She made a series of drawing, paintings, and "sculpture to wear" which personify these liminal beings. These were then worn and photographed by her in what became like an intense rite of passage. The images were used to create the animation 'Fasnacht'.
It is named after a festival in Northern Europe which involves processing in costumes and masks, in some areas only is through the night, ending at sunrise. Traditionally in some parts of Switzerland it was also a time people could be rude to and insult their neighbors, releasing what had been suppressed all year.
click Fasnacht on vimeo 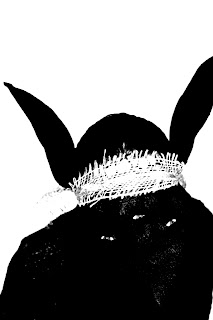 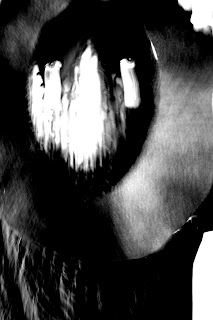 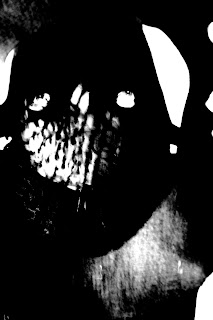 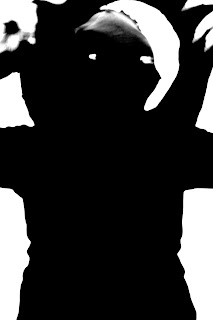 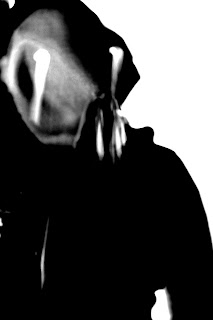 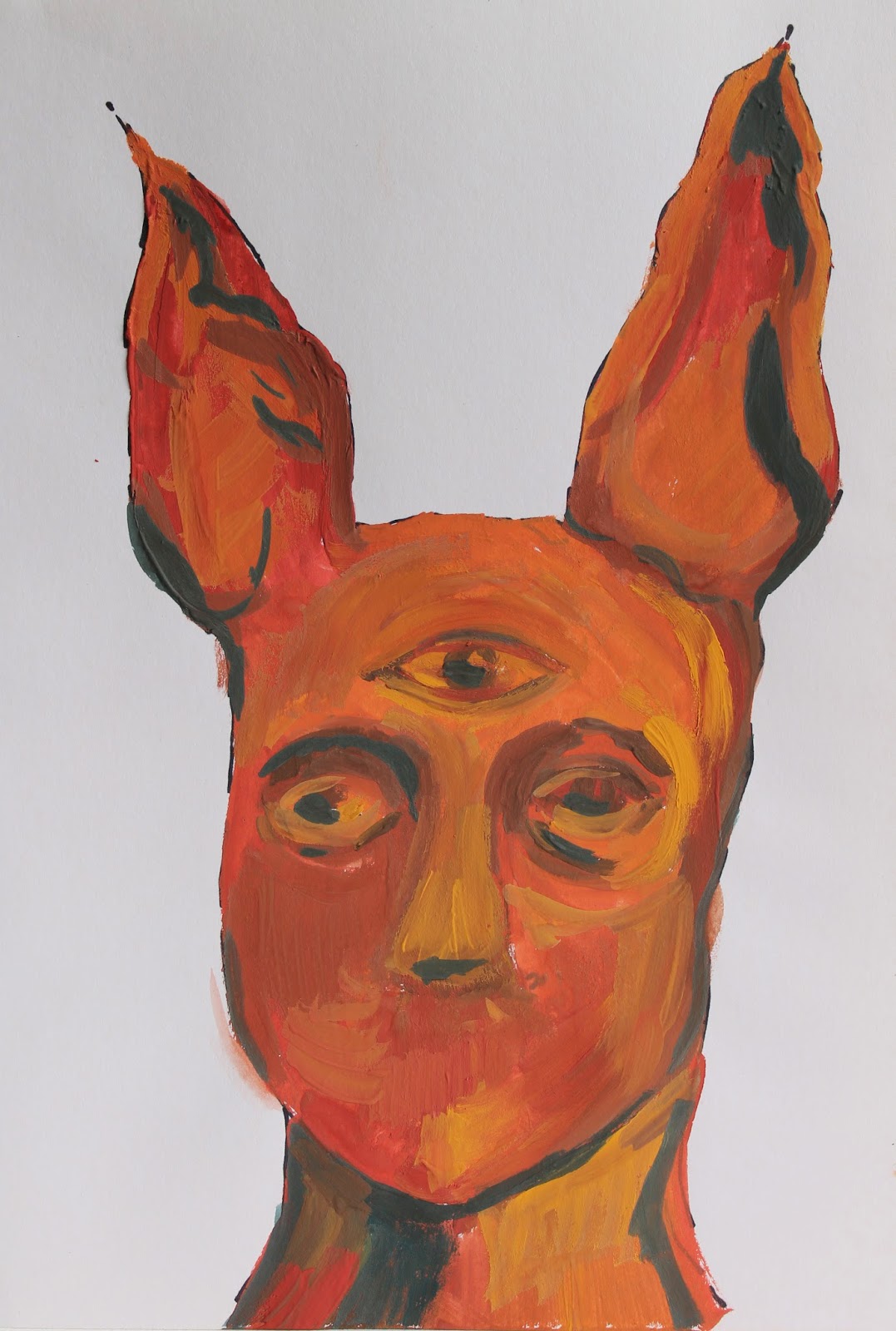 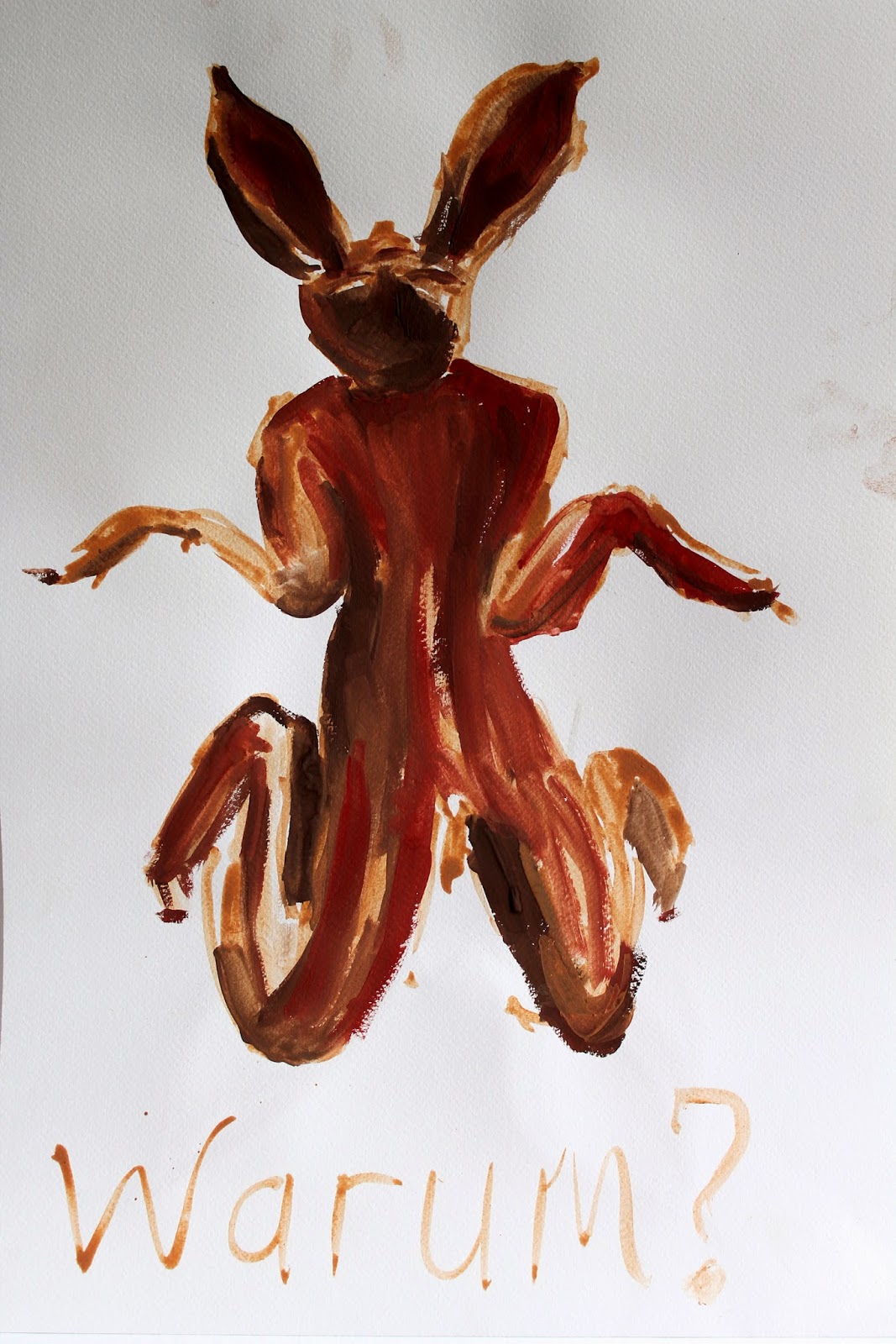 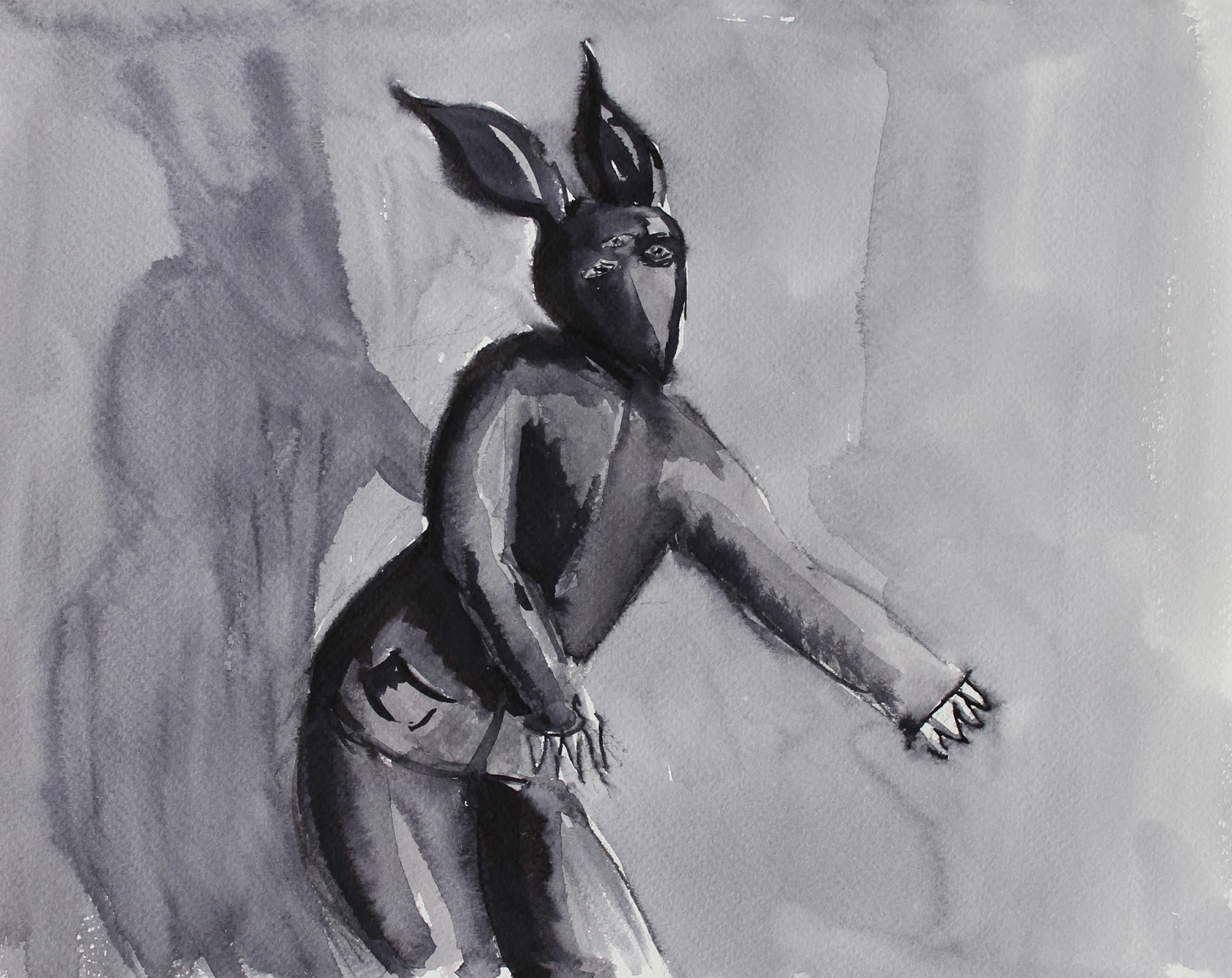 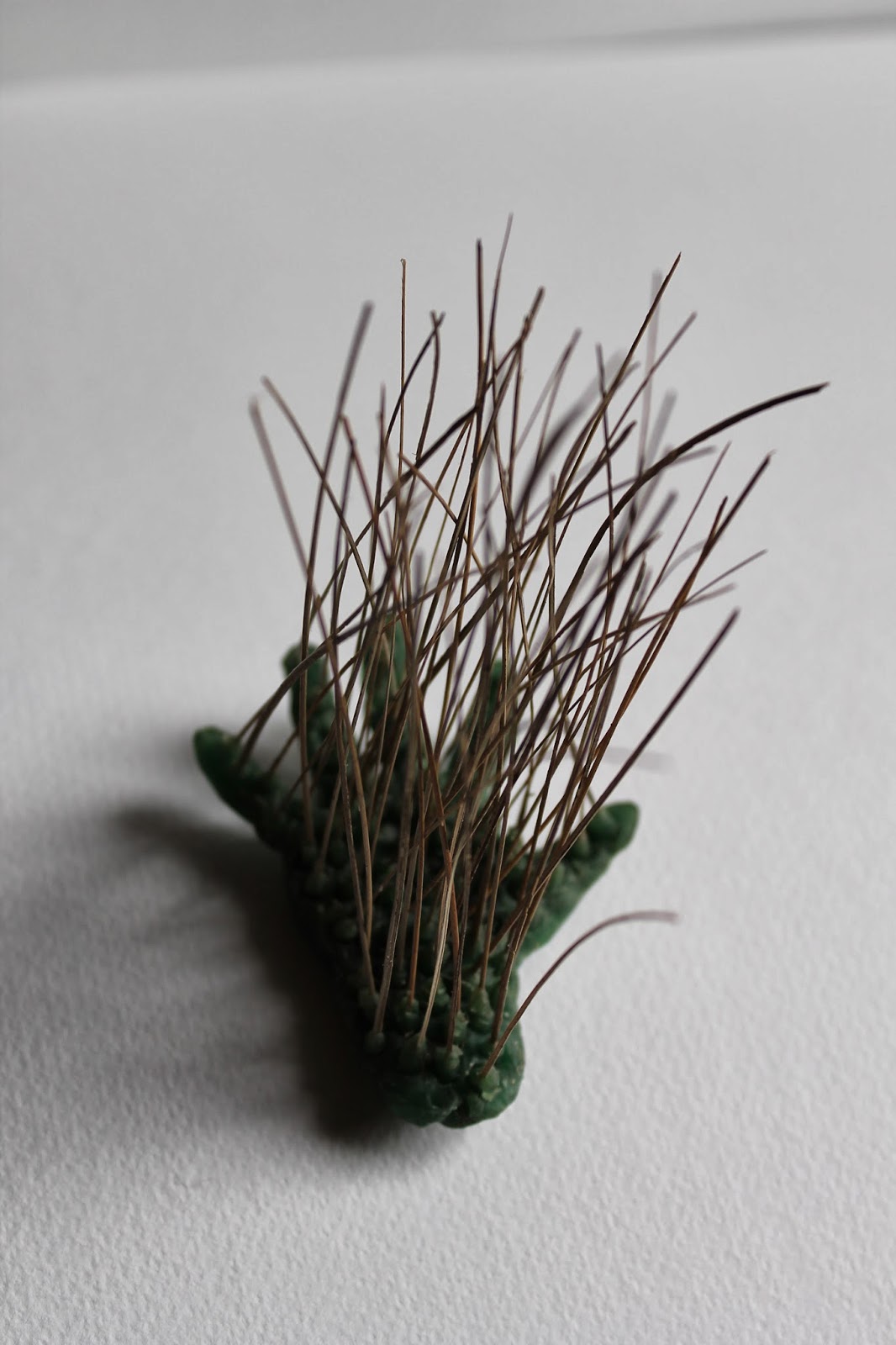 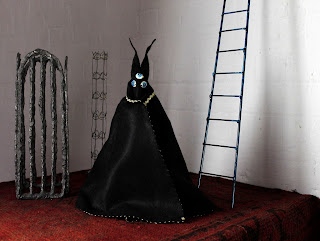 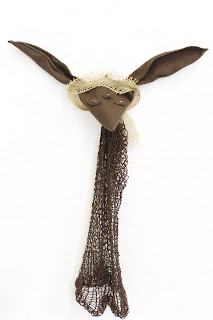 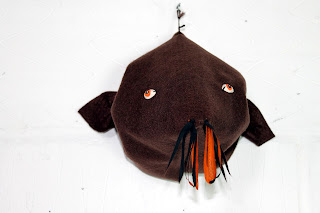 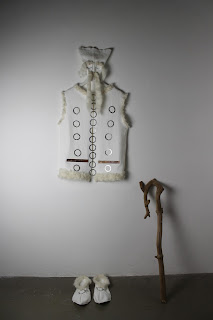 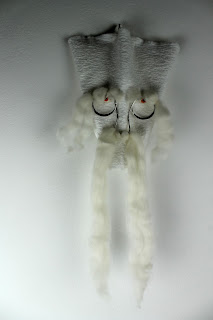 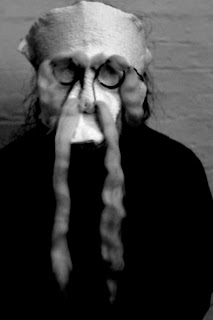 Foreword to the Catalogue by Jens Raddatz:

"The Sleep of Reason" is taken from Capricho #43 by Francesco de Goya and does not include the full title: “The sleep of reason produces monsters”. This particular etching shows a writer or maybe an artist who, exhausted, has fallen asleep on top of his work. He is surrounded by demon-like animals.
What would happen to us if our reason slept? If our rationality did not guide our destiny? Does our reason sleep at the same time as we do? Undoubtedly there were many more questions asked by the two artists Victoria Rance and Sylvia Lüdtke.  With her “sculptures to wear” Victoria Rance (London) does a role change. She makes sculptures which she wears, taking on the role of the different creatures. She then documents the existence of these demons by making animations. An obviously different approach is taken by Sylvia Lüdtke (Osnabrück).  She finds her demons directly in her environment; be it the remains of eggs, animals or microchips, as she shows us in her “inspiration-booster”. From these materials and some filigree wire and light-weight paper Lüdtke creates demons such as those we once feared (in our childhood) were under our beds, or she makes a diary of morbid memories, called “the morning after”.
I am delighted that this exhibition will take place in the Kunst-Quartier of the BBK Osnabrück, because it shows that personal commitment always bears fruit. Just one example: the preparation by the artists for this exhibition took more than a year; sketches were sent by email and discussed via Skype, results were posted on a virtual Cloud and were discussed again and so much more. I would like to thank both artists for their passion, engagement and their trust in trying out this “creative blind date”.

all images unless otherwise stated copyrighted to Victoria Rance 2013