from 10th May to 23rd June 2012
Sculpture, animation and digital images 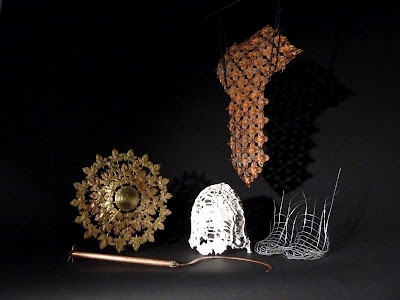 
The work for this exhibition began when I saw the huge column on Medusa’s head in the Byzantine Basilica Cisterns (or Yerebatan Sarnici) in Istanbul. I was awe struck by the chthonic nature of the gigantic stone head upside-down in the water under the city. It felt deeply symbolic and mysterious, as though the city was founded, or rather that era of the city was founded, on the suppression of the power of the feminine; even though here it is dark, deep and destructive. And so powerful that it turns people to stone.

When I returned to London I began to make work about it. I discovered that on top of the column at Cemberlitas in Istanbul, Constantine had been depicted as the sun god Apollo with the rays around his head going outwards – the powerful energy here is masculine: extrovert, creative and successful. The more I thought and read about Medusa and her story, the more I also thought about Perseus as a counterpart, and I was interested in all the equipment, support and magic help from the gods which the stories say he had needed to behead her. I envisaged him as a young boy and thought of opposites, male and female, youth and age, beauty and horror. 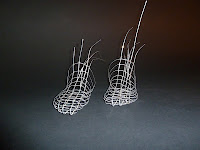 I made an aluminium version of Medusa’s hair as a head dress, and when my niece Nina Villanueva Rance, a dancer, came to visit my studio to interact with another sculpture, she saw it and asked to try it on. I subsequently worked digitally on the photographs  of her, and made an animation. My son, Jethro Pemberton, a composer, wrote music for it. To me this animation, the music and Nina's interaction re-established Medusa’s power and I wanted to explore the other half of the equation – the male power which pursued, challenged and beheaded her, in effect stealing her vitality, as the force of her head retained the power to turn to stone, and has been used for centuries to ward off evil on armour and buildings.  (The nazar, evil eye, or sometimes ‘eye of medusa’ is a remnant of this, and is a charm  or amulet to ward off envy.)

I continued to make more of the accoutrements that Perseus needed, as I had already made the flying shoes that were given him by Hermes, and his Helmet of Invisibility (or war cap of Hades). I made his sickle ( or ‘falchion’ in Roman texts and also used by Hades) and also his shield which was lent by Athena, wanting them all small enough for my younger son to play with. Then I saw in the British Museum a suit of armour made of crocodile skin which had been used ritually by Romans in Egypt. It carries a deep ancient power, with something of the prehistoric which crocodiles possess. I modelled some armour plating on this for Perseus.  Some stories say Perseus carried a ‘kibisis’ or wallet which he put Medusa’s head in after cutting it off, and as I made this I found myself integrating the image of the stone face from the cistern within the structure of the bag, and it gradually became a cage. The second animation I made is of my younger son Cole acting as Perseus and in pursuit of Medusa, and what becomes of them both in the animation remains ambiguous. 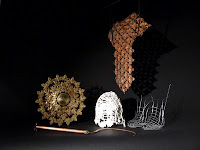 see Sculpture to Wear and Animation and Film and www.ekavart.tv